"The King - The Music of Elvis":
A Rock 'n' Roll Symphony

As a devout Elvis purist for five decades, I was more than a bit suspect when I took my seat in the Fox Theater for the Spokane Symphony’s presentation of “The King – The Music of Elvis.” Never an admirer of long hair music, it took Elvis’ name and a good deal of curiosity to entice me into purchasing my first ever symphony ticket. That I paid just $28 for a seat only six feet from the back wall of the balcony indicated my skepticism about putting Presley’s style of rock ’n’ roll in the hands of a symphony and four Broadway singers. It turned out, though, that I was in for quite a pleasant surprise. 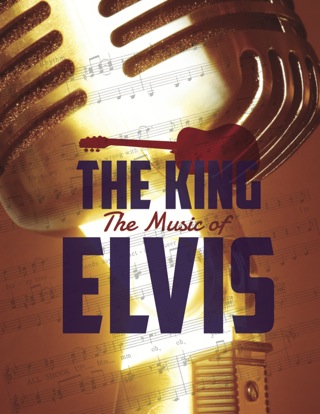 “The King – The Music of Elvis,” was part of the Spokane Symphony’s “SuperPops” series, a ruse commonly used around the country to get pop music snobs like me interested in symphonic music. The strategy required the symphony to take a step back and provide musical support for a small troop of performers booked in from out of town.

Four singers and a drummer comprise the travelling cast of “The King – The Music of Elvis.” Scott Coulter, Lee Lessack, Johnny Rodgers, and Brian Wilson provide the show’s vocals, with Rodgers doubling up on the piano. All four are Broadway-style veterans with impressive show biz credentials.

Coulter created the Elvis show and co-produces it with The Cooking Group (TCG) Productions. “The King – The Music of Elvis” is not a touring production. It’s booked for individual performances on TCG’s website. Other than the one in Spokane, I could find evidence online of only four other recent bookings: with the Calgary Philharmonic Orchestra on September 20-21, 2013; the St. Louis Symphony on November 10, 2013; the San Diego Symphony on June 7, 2014; and a three-night run in Winnipeg on October 17-19.

In cast size, “The King – The Music of Elvis” resembles the touring “Million Dollar Quartet” musical, but there the similarity ends. In Coulter’s show, the guitar makes only a cameo appearance and the singers make no pretense of impersonating Elvis.

“When I set out to create this show, I wanted to show the evolution of not only Elvis but of rock ’n’ roll,” Coulter said. “I also set out to create a show that was absolutely not an impersonation show. In my opinion, Elvis was a one of a kind. I think if he can be so easily impersonated, it diminishes what made him so unique.”

After the symphony played the National Anthem, the quartet of singers made their entrance, wearing matching dark suits and ties. Before launching into their first number, Coulter set the ground rules. “We don’t look like Elvis,” he said, stating the obvious, “and we don’t sound like Elvis.” Still, he invited those so moved in the audience to get up and dance in the aisles during the performance.

With Rodgers at the piano, the group opened with “Heartbreak Hotel” and followed with “Blue Suede Shoes.” The program continued with a medley of Presley’s early hits. A grouping of Elvis movie songs (“Love Me Tender,” “Loving You,” “Blue Hawaii,” “Can’t Help Falling in Love) moved the program into the ’60s. Then came a procession of the King’s early hits during that decade—“G.I. Blues,” “It’s Now or Never,” “Are You Lonesome Tonight,” and “Return to Sender.” A medley of Elvis’s gospel songs led up to intermission.

Coulter, Rodgers, Lessack, and Wilson took turns singing lead and backup. Occasional duets and four-part harmony added variety to the program, and all participated in alternating humor and historical dialogue between numbers.

“When you spend two hours experiencing his musical legacy, it really is jaw dropping,” Coulter said. “We also tell some of his personal stories which make you hear the songs in a new way. There’s a reason he sang the songs he sang; his personal life influenced his musical life, and hearing about the two together paints a portrait of the man that many folks might not see otherwise.”

The group’s knowledge of Presley’s life and career was impressive. The information they shared, including dates and specific facts about Elvis, was at all times historically accurate. It became obvious that all four are, in varying degrees, Presley fans, especially Brian Wilson, who showed the audience his tattoo of Elvis’s signature on the upper part of his chest.

“He changed the world in 1956 and lived up to the hype,” Wilson said of Presley. “There isn’t a song out there that Elvis couldn’t sing. Vocally, he had amazing power when needed and blended it, perfectly, with a tender, vulnerable caressing of the melody. Every time you saw Elvis, he looked perfect and sounded perfect." 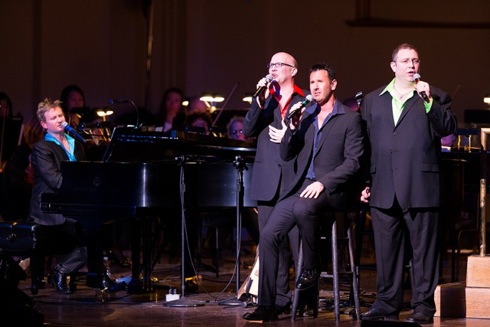 Not a connoisseur of symphonic music, I’m going to let Allison Babka, who saw the November 2013 St. Louis performance of “The King – The Music of Elvis,” assess the role of the orchestra in the show. Writing in the Riverfront Times Blog, Babka noted that the symphony “beautifully framed the singers’ voices and served as the fifth member of the ‘Elvis Presley Captain’ collective. Together, the musicians changed a few time signatures and added excellent harmonies to Presley’s traditional rock arrangements.”

She added, “The St. Louis Symphony and the vocalists were not out to perform Presley’s songs note for note; instead, the musicians created new arrangements for these special songs that had changed rock & roll forever. Who would have thought that adding a few violas, a tuba and some longer notes would make ‘Jailhouse Rock’ really rock? Apparently these guys. And the surprising thing was that it worked.”

The singers’ modest movement with the rhythm was enough to evoke the spirit of Elvis on stage, and the ushers, who obviously had conspired ahead of time to dance during the uptempo numbers, helped enhance the audience’s enthusiasm.

For the second part of the program, Coulter, Rodgers, Lessack, and Wilson returned to the stage, this time with their ties replaced by open-collared shirts. With the focus now on Presley’s ’70s stage show, they opened with “See See Rider” and moved on to “Burnin’ Love,” “Viva Las Vegas,” and “In the Ghetto.” The sound in the theatre now more closely resembled Presley’s recordings from that period.

“When we perform with the symphony, our arrangements sound huge, especially on the early hits,” Wilson explained. “Later in his career, Elvis toured with a very large band that included strings, horns and percussion, so our arrangements sound pretty close to the way Elvis did in the late ’60s and early ’70s.”

Rodgers then strummed a guitar while singing “Movin’ to Graceland,” his own composition, inspired, he explained, by a personal visit he had made to Elvis’ home in Memphis. It was the only number on the show’s set list that Elvis never recorded.

The show moved to its conclusion with two emotional numbers—“My Way” and “American Trilogy.” The encore, “Suspicious Minds,” with its up and down rhythm, sounded very much like Presley’s spirited stage version.

The takeaway from “The King – The Music of Elvis” is that we now live in a era when Elvis Presley’s songs can be superbly blended with symphonic music. Fifty years ago he was a musical pariah and his brand of rock ’n’ roll was the bane of parents, clergy, and community leaders. Compared t0 today’s pop music, Presley’s recordings seem tame. Now some of the most conservative music halls in the country are showcasing Elvis and his music. Some of his fans are no doubt disappointed that it has come to that. But, hey! Anything that helps preserve his musical legacy is all right with me, and “The King – The Music of Elvis” does so with grace and respect. — Alan Hanson | © October 2014

"Fifty years ago he was a musical pariah … Now some of the most conservative music halls in the country are showcasing Elvis and his music." 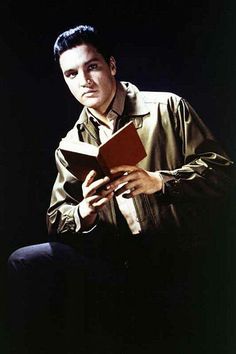