On Sunday, September 1, 1957, Elvis Presley took the stage for a concert in Tacoma, Washington. It was the middle stop on his five-city tour of the Pacific Northwest. The crowd of a little over 4,000 was by far the smallest he faced that Labor Day weekend. Those who were there, however, were fortunate to experience Elvis’s most intimate show of the year. First of all, the venue was the Lincoln Bowl, a cosy high school athletic field with close-in seating that offered all spectators good viewing angles of the stage. The 2 p.m. show time was also a plus. It was one of Elvis’s few outdoor daylight appearances of the year, and that, along with Presley’s closeness to the crowd, created perfect conditions for camera-toting teens. Finally, by all accounts, Elvis held nothing back in his performance, even though the crowd was small and he had another show scheduled that night in Seattle.

The following morning, before catching the train for Portland, Elvis sat in his Seattle hotel room reading reviews of his Tacoma and Seattle performances the afternoon and evening before. When he finished, he took the time to place a personal call to Dan Duncan of the Tacoma News Tribune. Elvis told Duncan that his review of the Tacoma show was “the best article ever written about me.”

Certainly, Duncan’s morning-after review of Presley’s Tacoma show was well written, balanced, and humorous. But an even more interesting article by Duncan appeared in the Tribune a week later, on September 8, 1957. It was tucked out of the way at the bottom of page B-5. It is one of the most unique and entertaining articles I’ve ever read about Elvis. In my Elvis ’57 book I quote a few passages from the article, but here it is in its entirety.

(Note: Duncan intentionally used all lower case letters in his article, since the autograph he received from Elvis read, “elvis presley,” without capitals.)

memo to the boss:

well call me a old houn’ dog if i didn’t get to stand just as close to elvis presley as i do to you when you aren’t waving those darn copy shears around.

since a lot of folks have sidled up to me in the past few days and asked for the plain, unvarnished truth about old sideburns hisself, i figured i’d let you in on all the secrets i learned.

first off, this elvis has all his own hair and don’t let anybody tell you it’s a wig or those sideburns are painted on, and when those locks fell down on his forehead and he had to peek through them like veronica lake did before she went out of style, that was the real elvis.

elvis is real nice and easy with the press and a real dazzler with the young girls who managed to get into his dressing room on the strength of being fan club officers or something like that.

he’s quick on the uptake, too. i asked him if it was true that he flunked his army physical and wasn’t going to be called into the service and have his hair cut off gi-style, and all that, and he answered, “well hardly, sir. shucks, I passed it all right.”

when elvis put his arms around one of his teenage fans i thought a riot was in the making. the other girls closed in so fast, he could hardly breathe and he’s no midget.

i got elvis’ autograph. yes, indeed. i did along with all the policemen on the tacoma force and all the radio and photography boys. it says, “thanks, elvis presley,” although for the life of me i can’t figure why he wanted to thank me before i even wrote the story.

well, the music was really the thing out there at lincoln bowl, and make no mistake about it this boy elvis could have taught dr. goebbels a thing or two about mass psychology.

this rock ’n’ roll business has a real slugging beat that twists your insides all around and sets up some sort of chemical action that comes out in foot-tapping and screams. since i am too old to be screaming at 22-year-old singers, especially when they aren’t girls, i just fixed a silly grin on my face and it served the purpose.

somebody with elvis’ troupe came up and looked at that grin and said, “he’s great, isn’t he? gets under your skin, doesn’t he? tremendous show, isn’t it?” i just kept right on grinning and he walked off satisfied.

the next day after my story was in the paper i got a long distance telephone call and the operator said hold on a minute, mr. presley is calling you. i figured he was mad or something and i looked for a place to hide, but there wasn’t anything to do but stand there and take it like a man.

he came on the line, elvis did, and instead of tearing me apart he said nice things about the story and how it was the best ever written on him and how he wanted to be sure and see me the next time he’s in town. this should boost my stock considerably with some of my teenage nieces and nephews who are inclined to look upon old uncle don as a real square.

i been sharpening up on my ukulele and i’ve got houn’ dog down pretty good, so that should show them.

right now, i’ve got a problem, though. this elvis presley autograph is sitting on my dresser and not doing anybody much good. for all i know the paper still has his fingerprints on it and they could be brought out by any good crime lab.

should i send it to the smithsonian institute or to poor old cousin harry who married a hula dancer. 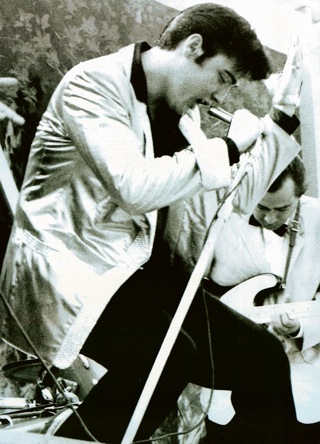 "i got elvis’ autograph. yes, indeed. i did along with all the policemen on the tacoma force and all the radio and photography boys. it says, 'thanks, elvis presley.'" 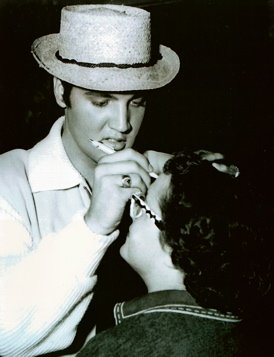