In the ’70s, Alan Set the Standard
For Today's Elvis Tribute Artists

The first Elvis Tribute Artist I ever saw was Donnie Thompson. We were both in the sixth grade at Holmes Elementary School in Spokane back in 1961. Donnie would go into his Elvis act at parties, on the playground, in the gym—anywhere the girls gathered. And he was good. I remember him singing current Elvis numbers, like “Stuck on You” and “Slicin’ Sand,” with accompanying gyrations. At age 12 I wasn’t an Elvis fan, but I sure admired Donnie’s ability to attract the chicks by mimicking Elvis.

Donnie moved out of the neighborhood the next year, and I didn't see another Elvis Tribute Artist until 16 years later. A couple of days after Elvis died in August 1977, I went to Las Vegas to visit my father. Headlining at the Tropicana that week was “Alan: A Tribute to Elvis,” and due to the circumstances, it was the hottest ticket in town. My father had connections, though, so we had pretty good seats in the jammed theater. 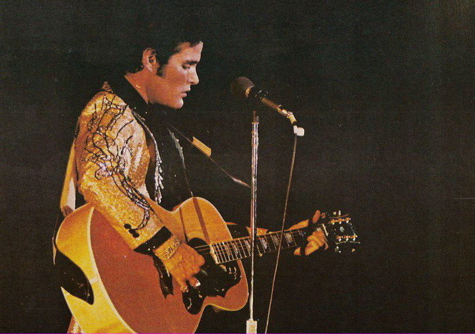 I had never heard of “Alan,” although at the time he was acknowledged as the best pseudo-Elvis in the business. Alan Meyer was born in Philadelphia and raised in Southern California. As a youngster, he became fascinated with Elvis’s style and spent years studying and perfecting the King’s every gesture and nuance. Only a few friends knew of his ability to recreate Elvis’s style, until he was coaxed into entering an amateur talent contest in a Seattle tavern. The crowd loved it, and the artist “Alan” took his act on the road.

Alan soon caught the eye of Dick Clark, who began promoting the act in 1974. A tour around the U.S. and Canada led to a successful debut in Las Vegas at the Thunderbird. Keep in mind that Alan was drawing big crowds to his Elvis tribute show when Elvis was still alive. His respectful approach to Presley allowed him to pull it off.

• Alan never pretended to be Elvis

“I’m not pretending to be Elvis,” he told a Reno newspaper in 1978. “I don’t talk to the audience as Elvis, but I talk to them about Elvis. What I do is not a rip-off but a tribute. I call my show a ‘tribute’ because it wasn’t an impression. I don’t over-emphasize his style and never step out of my character as a fan. I sang along with every Elvis record since ‘Teddy Bear,’ so I guess a voice can be molded like plastic.”

His ability to keep Elvis at arm’s length but still sound and look like Elvis was the foundation of his success. In fact, in 1976 and 1977, Alan’s act got more ink in Billboard’s “Talent in Action” column than the real thing. The last Presley concert that Billboard reviewed was his show in Roanoke, Virginia, in March 1974. While ignoring Elvis over the next three years, Billboard twice reviewed “Alan: A Tribute to Elvis.”

On May 1, 1976, the magazine covered Alan’s show at Magic Mountain in Los Angeles. “Although the protégé of Dick Clark is credited with breaking box office records at the Thunderbird Hotel in Las Vegas,” reviewer Larry Oppen noted, “Alan’s name is relatively unknown in Southern California, so it was Presley magnetism that attracted crowds to the park’s Showcase Theater. However, people who attended knowing they would be seeing an imitation weren’t prepared for the artist’s uncanny resemblance to Elvis both in appearance and performance. It soon became apparent that there was a genuine showman on the stage and audience reaction turned out to be as ecstatic as for the real thing … His timing is near perfect and he convincingly gyrates to the various selections from his repertoire of more that 400 songs.”

Billboard again reviewed Alan’s show on April 23, 1977, this time at the Roxy in Los Angeles. “Alan’s show is above all, as he bills it, a tribute to Presley, not merely exploitative imitation as it could so easily have been,” explained writer Susan Peterson. “One reason for this is Alan’s own fine baritone, which so naturally (and uncannily) resembles Presley’s, making forced parody unnecessary. The mannerisms, and the look, are of course more studied, but done with such perfection and obvious respect for the original that again there is no hint of satire. Alan’s attitude towards his material is one of reverence, tempered with a fine sense of showmanship and good fun. It all adds up to no more or less than he claims—a tribute to the King and a truly enjoyable one.”

• Variety: Alan’s voice had the magic of youthful Elvis

Other show business journals also praised Alan’s show. Variety noted that he, “restores the original. When Alan lets go his voice has more magic than Presley’s even at his youthful best." The Hollywood Reporter added, “His re-creation of Presley’s style and material is an intense, a nostalgic and even an eerie experience.”

Alan is generally credited with creating the three-part show that is standard today among Elvis Tribute Artists. In his opening segment, he portrayed the rockabilly Elvis of the fifties, complete with padded shoulders and blue suede shoes. Then he changed into black leather to recreate the feel of Presley’s ’68 Comeback Special. For the final segment, based on Elvis’s Vegas shows, Alan came out in a jeweled jumpsuit, performing karate kicks and handing out scarves to women at stage front.

“He wasn’t just my favorite artist,” Alan said of Elvis. “He was my only artist.” He hoped someday to perform for Elvis, but it never happened. So his performance at the Tropicana that evening in August 1977, when my father and I were in the audience, turned out to be a “memorial” tribute to Elvis. Still, the show remained full of energy and excitement. Alan refused to make it a wake.

The evening of August 16, 1977, the day Elvis died, Alan held a press conference at the Tropicana to announce he would play the remaining week of his engagement there. Cancellation, he said, "would be selfish thing to do … now more than ever is the time to pay tribute to Elvis, and the show must go on."

In the middle of the show I attended, just after Alan finished one of Elvis’s rhythm numbers, a man several tables to our right stood up and yelled to get Alan’s attention. The band stopped playing and Alan looked toward the man. “I think in consideration of Elvis’s passing,” the man said with a slurred voice, “you ought to sing ‘His Mama Liked the Roses.’” Alan responded that that song would not be in keeping with the spirit he was trying to create on stage. After about 30 more seconds of back and forth, Alan finally said, “I really need to get on with the show.” The man then asked, “Would you like me to sit down?” Alan, squinting out through the blinding stage lights, said, “Man, I can’t even tell that you’re standing up.” I remember thinking to myself, “Yeah, that’s exactly what Elvis would have said.”

Alan was 28 and at the top of his game when Elvis died in 1977. He was a pioneer in what became the rapidly expanding show business niche of Elvis Tribute Artists. They seem to be everywhere now. Elvis Presley Enterprises has embraced the concept, inviting local contest winners across the country to Memphis for a final national competition during Elvis Week each August.

Alan Meyer set a high standard for Elvis Tribute Artists, a standard of respect and regard for Elvis that most performers in the field continue to honor. Certainly Elvis is missed and can never be replaced, but, as one writer noted in a review of “Alan: A Tribute to Elvis” in 1978, “If imitation is the sincerest form of flattery, the King has never been more flattered. And immortalized.”— Alan Hanson | © March 2010

Reader Comment: I was 9 years old when I met Alan at the McDonalds on Woodman and Osborne in Arleta California in 1976. I was performing “Hound Dog” and “Teddy Bear.” Alan did about 4-5 songs. He told me "Keep it up kid.” He said he was on his way to Vegas ! (We were singing for our dinner at the “McDonalds Big Mac Tonight Club.") It's funny because I also made a living for 27 years as an Elvis Tribute Artist! — Joe Whitely (June 2018)

"I’m not pretending to be Elvis. I don’t talk to the audience as Elvis, but I talk to them about Elvis. What I do is not a rip-off but a tribute."