Those devoted Elvis fans who adhere to a perpetually positive image of the King probably are not going to like this blog. I’m actually going to give my personal Top 10 Least Favorite Elvis Recordings. But c’mon now. Among the hundreds of songs that Elvis recorded, aren’t there at least a handful that you can’t stand listening to? I mean, there are plenty of tunes in his movie soundtrack albums alone that must make even the most dedicated Elvis fan cringe. So let’s have some fun comparing my list of Elvis’s worst recordings with your own.

In making my own choices, I first eliminated from consideration all the novelty tunes from his movies. That group includes the likes of “Fort Lauderdale Chamber of Commerce,” “Look Out Broadway,” “Old MacDonald,” “Yoga Is As Yoga Does,” and “He’s Your Uncle Not Your Dad.” Bad as they are, these songs are basically dialogue spinoffs and were never intended to be considered as pop recordings. 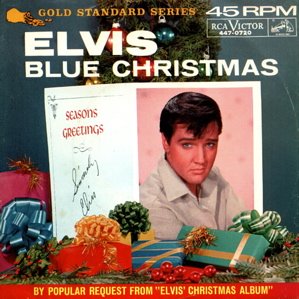 However, the majority of Elvis’s movie songs are eligible for any fan’s lists of most and least favorite Presley songs. Remember, some of Elvis’s best recordings were movie soundtrack songs, like “Love Me Tender,” “Teddy Bear,” “Can’t Help Falling in Love,” and “Return to Sender.” So, just as several movie songs are on my list of favorite Elvis recordings, several others are on my list of my least favorite Elvis recordings.

Before starting my list, let me give the criteria I used in choosing the songs on it. In general, it’s just a matter of personal taste. I simply don’t like the sound of these recordings. The underlying reason differs, however. It’s not always that Elvis did a poor job on the tune, although that is the case on some of them. With others, the song itself is so bad that it would have been a loser no matter who recorded it. The list is in descending order, from my tenth least favorite Elvis recording down to my least, least favorite.

OK, I know this one is considered by many to be one of Elvis’s classic recordings. His delivery on the original 1956 recording is fine, but the syrupy lyrics and rhythm of the song make my hand automatically punch the CD advance button as soon as I hear the opening notes. And I’m not the only one who considers this song a loser. Composers Jerry Leiber and Mike Stoller have claimed “Love Me” was the worst song they ever wrote. 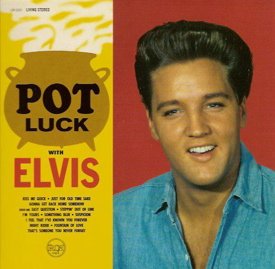 The fault for this one from the “Pot Luck” LP is shared by Elvis and composers, Bill Giant and Jeff Lewis. No real man (which Elvis certainly was) should be singing lyrics like, “One thought of you, my heart begins yearning. I feel it turn to a fountain of love.” Maybe Lewis is to blame for the song’s girly-man lyrics, as it was the only Elvis song he co-wrote. As for Elvis, he lost me whenever he went into that high-pitched voice, like he did on “Fountain of Love.”

Here’s another one of Elvis’s legendary recordings that I never liked. Elvis’s version is considered a Christmas classic, though I’ve never understood why. I blame the Jordanaires for the irritating sound on Elvis’s recording. Their vacillating “o-o-o-os” on the recording are like fingernails on a blackboard to me. Elvis redeemed himself by singing a beautiful version of “Blue Christmas” on his ’68 Comeback Special.

This one’s all on Elvis. The Pointer Sisters had a hit with their beautiful rendition of the song in 1974. Where was Elvis’s beautiful voice in 1975 when he recorded it? He put way too much volume into the lyrics, like someone who had a couple of drinks to bolster his confidence before taking the mike at a karaoke party. Unfortunately, that was the case with many of his recordings in the final couple years of his life.

First of all, the song itself has neither spirit nor a pleasant melody, which is puzzling, considering it was co-written by Mark James, who gave Elvis “Suspicious Minds,” “Moody Blue,” and “Raised on Rock.” But it’s mostly Elvis’s delivery that makes this song difficult to listen to. You can hear the strain in his voice from beginning to end. Elvis certainly could sing a wide range of songs, but this one was beyond him. 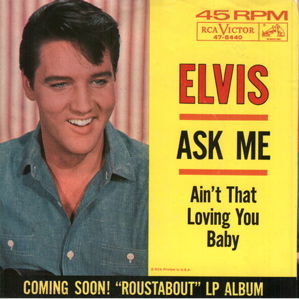 This one was released as a single, so someone must have thought it was a good recording. Originally, though, there must have been some concern about it, as Elvis’s May 1963 recording of the song was deemed unusable. He went back into the studio to try it again in January 1964, and it was that version that was eventually released. Again, it’s the high voice, nearing falsetto level in places, that runs counter to my image of Elvis as a hard-driving rock singer.

I’ve got to call out Lenore Rosenblatt and Victor Millrose for writing this turkey. Elvis himself must have cringed when he heard the demo of this one destined for the Girl Happy soundtrack. It was supposed to be a hard rocker, but instead the lyrics are an embarrassment to Elvis. Example: “Doncha worry if ya land in jail; I’ll forge your mail if ya can’t make bail tonight.” Nuff said.

This country song was a hit for George Jones in 1962. For some reason, when Elvis recorded it at Graceland in 1976, he decided to give it a hitch-and-go blues interpretation that totally destroyed the original beauty of the song. In that period Elvis did the same thing to other country songs, like “He’ll Have to Go” and “I’ll Hold You in My Heart.” Elvis would have been better served to sing these songs in the country fashion for which they were intended.

From Harum Scarum, this one is absolutely the worst soundtrack recording of Elvis’s career. It’s the work of Joy Byers, who wrote much better songs for Elvis, including “It Hurts Me” and “Let Yourself Go.” Again, it was designed as a rocker to fit Elvis's style. But the lyrics are inane and the rhythm is AWOL. No self-respecting pop singer would ever have recorded this one. If there was ever a time Elvis should have stood up and said “No,” it should have been when he first heard the demo for “Hey Little Girl.”

Elvis’s beautiful voice was never more evident than on the many ballads he recorded during the 1960s. For some reason he changed his style on “Where Do You Come From.” On it he sounds like he's pretending to be an opera singer trying to sing a pop ballad. His voice slowly pitches up and down in a decidedly unmusical fashion. I’ve resisted listening to this recording ever since it was first released as a single in 1962. The song only spent one week on Billboard’s Top 100, where it peaked at #99. It was the worst performance of any Presley recording to actually reach the chart.

But get this! “Where Do You Come From” was still credited with selling over a million copies. The reason—“Return to Sender” on the flip side was the real hit, selling over two million copies. Under some ridiculous accounting system, “Where Do You Come From” was credited with half the total sales, and my least favorite Elvis recording ever wound up with gold record status. Unbelievable! — Alan Hanson | © May 2009

"Among the hundreds of songs that Elvis recorded, aren’t there at least a handful that you can’t stand listening to?"