Flaming Star was the second of three serious Western films made by Elvis Presley. For my money, it was the best, far better than either Love Me Tender or Charro!. It was another small step forward for Elvis in his goal of becoming a serious actor. (Remember, he was only 25 years old at the time and still learning his craft.) Unfortunately, after Flaming Star, box-office conscious Hollywood would offer Elvis few future opportunities to develop his acting talent. 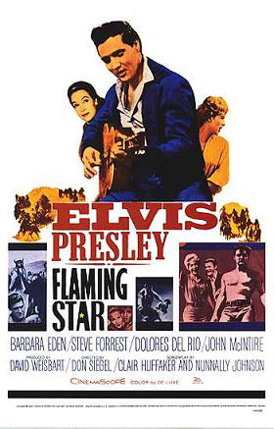 Twentieth-Century-Fox pushed the film hard in the pages of Variety. In a full-page ad on November 2, 1960, the studio listed Flaming Star as one of their four main offerings for the upcoming Christmas season. That was followed up with a double-page ad for the film on November 16. Variety reviewed the movie in its issue of December 21, the same day that it was released nationally.

Variety’s reviewer, noting that the movie appealed to a much wider audience than previous Presley films, predicted box office success for the David Weisbart production.

“‘Flaming Star’ has Indians-on-the-warpath for the youngsters, Elvis Presley for the teenagers and socio-psychological ramifications for adults who prefer a mild dose of sage in their sagebrushers. The plot—half-breed hopelessly involved in war between white man and Redman—is disturbingly familiar and not altogether convincing, but the film, attractively mounted and consistently diverting, will entertain and absorb the audience it is tailored for. There’s good business in store for the 20th-Fox release.”

I first saw Flaming Star on television during the summer of 1967. Due to the scarcity of Elvis songs, it had never been one of my favorite Presley movies. After many years of not viewing it, I did so recently and was pleasantly surprised that the movie’s overall impact and Elvis’ performance in it were much better than I had remembered them.

• Sceenplay is taut and gripping

Tension on several levels is developed early on and the story moves along quickly with lots of action, some of it very violent for its time. Variety called the screenplay “taut, plain and gripping.” And A. H. Weiler, in his New York Times review of December 17, 1960, judged it overall a generally pleasing film. “‘Flaming Star’ is an unpretentious but sturdy Western that takes the time, the place and the people seriously,” Weiler noted. “Although it is not electrifying, ‘Flaming Star’ makes a neat and satisfying adventure.”

As for Elvis, he never looked better in any of his films either before or after Flaming Star. Lean, tough, and handsome, he was given plenty of opportunity to show off his athletic build while running around shirtless late in the film. “Physically, he is thoroughly believable,” stated Variety, “and athletically he is well-endowed for the part’s masculine demands.” 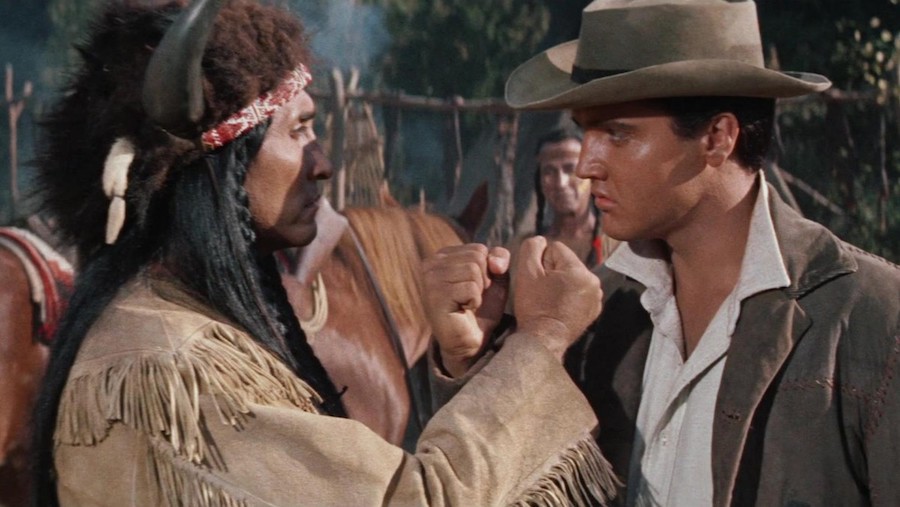 While praising Presley’s appearance, Variety was less laudable about his acting ability in Flaming Star.

“The role is a demanding one for Presley. The film relies heavily on his reactions as an explanation for its dramatic maneuvers and thematic attitudes. But, at this stage of his career, Presley lacks the facial and thespic sensitivity and projection so desperately required here … And one other thing can be said for Presley’s approach—he’s never guilty of over-acting.”

In the Times review, Weiler gave Elvis passing marks. “Although he is not called on to carry a histrionic load,” he wrote, “Presley, thanks to fine makeup and the color cameras, is a passable red youth … He sits a horse well and is properly brave and stoic, even to the point where he sees the ‘flaming star’ of death.”

Like in his first Western, Love Me Tender, Elvis’ character dies at the end of Flaming Star. This time, though, he rides off into the hills to perish discreetly off camera. Variety’s review termed the ending “contrived,” but Weiler saw some meaning in Presley's final ride into the closing credits. “The warfare destroys all but one of the Burtons in an unhappy ending that seems to underline the sadness of the period when the Indian began to vanish,” Weiler noted. 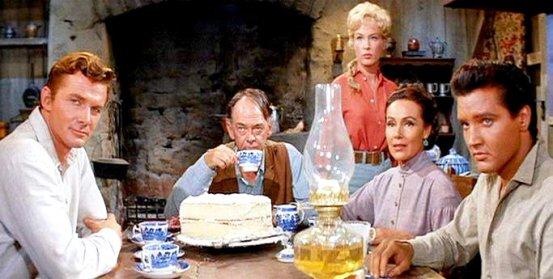 • Elvis’ singing limited to one scene

Only in his later Western, Charro!, did Elvis sing less on screen than he did in Flaming Star. As Pacer, he sang only one time, other than the title song over the opening credits. And “A Cane and a High-starched Collar” was gotten out of the way within minutes after the opening credits ended. The film than settled down into a straight, action Western the rest of the way.

Elvis recorded two other songs that were intended for use in Flaming Star. The film’s double-page ad in Variety on November 16, 1960, promised theater owners that the film would feature “Elvis singing the song his fans will love most—‘Flaming Star’—and 3 others!” Scenes with Presley singing “Britches” and “Summer Kisses, Winter Tears” were filmed, and a preview of the four-song version of the film was shown at the Academy Theater in Inglewood, California, on November 25, a month before general release. According to the “Behind the Scenes Notes” in RCA’s 1995 Double Features CD release, “Apparently, there was laughter during the ‘Summer Kisses, Winter Tears’ segment where Elvis was singing to Indians around the campfire—hence its hasty deletion!” The “Britches” scene suffered the same fate.

While viewing the film’s final two-song version, it’s easy to identify where the two dropped songs were originally placed. From a dramatic point of view, pulling those two musical sequences was the right call. One only has to go back and observe how several Elvis singing scenes effectively chopped up the dramatic storyline of Love Me Tender to realize what similar damage Flaming Star’s narrative would have suffered with the same treatment.

Although Flaming Star was a step forward for Elvis, in the end the film delivered a body blow to his aspirations of becoming a good actor. It opened in theaters on December 21, 1960, exactly four weeks after G.I. Blues was released on November 23. Hollywood execs, along with Colonel Parker, were able to compare side-by-side the performance of the light, song-filled comedy with that of the serious, song-sparce Western.

The contrast was stark. That holiday season G.I. Blues reached as high as number two in Variety’s weekly list of top-grossing films and finished 14th in the publication’s list of annual box-office ratings. Flaming Star, by comparison, peaked at number 12 in the weekly listings and finished far down among the year’s top grossers.

The 11 songs in G.I. Blues fed sales of the film’s successful soundtrack album, which, in turn, led to multiple viewings of the film by the Presley faithful. It was a double-punch combination that spelled success for both Hollywood and RCA. If Colonel Parker hadn’t known it already, the G.I. Blues-Flaming Star face-off must have convinced him that his boy’s future in Hollywood was in song-filled comedies. Wild in the Country was already in the works, but after that there would be no more of this “serious actor” stuff in Elvis Presley’s future. At the box office, Flaming Star proved that his fans did not share Presley’s most cherished dream.— Alan Hanson | © March 2008

"Flaming Star has Indians-on-the-warpath for the youngsters, Elvis Presley for the teenagers and socio-psychological ramifications for adults who prefer a mild dose of sage in their sagebrushers."