OK, I’m going to say it right up front. Follow That Dream is the best film Elvis Presley ever appeared in. I’ve always felt that way, and every time I see the movie I become more convinced of it. Now, I don’t claim to be a professional film reviewer, and being an admitted Elvis fan probably clouds my judgment somewhat. Still, the elements in Follow That Dream—the script, the humor, the setting, the acting of the entire cast, the message—all come together to create a highly entertaining film. I never tire of watching it, and to me that’s the test of a good movie. 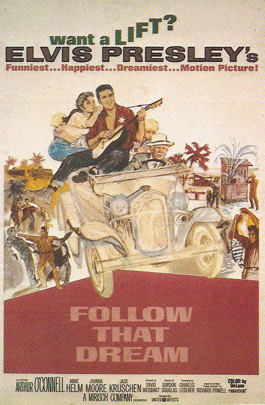 The film is a “romantic, musical, hillbilly comedy.” The hillbilly element is the most pronounced. Only Granny is missing as the Kwimper jalopy rolls down the highway in the opening scene. The backwoods innocence, lack of education, and inherent honesty of the hillbilly stereotype are all used effectively to create humor and a little drama in the film.

Variety’s review of Follow That Dream on March 28, 1962, rightly praised the film’s writer and director for their work in shaping the movie. “Scenarist Charles Lederer has constructed several highly amusing scenes in tailoring Richard Powell’s novel, ‘Pioneer, Go Home,’ to fit the specifications of the screen. And director Gordon Douglas has made capital of the screenplay’s better moments, translating the comedy of the typewriter into amusing and fast-paced visual terms.”

The amusing scenes, which are spaced nicely through the film’s first 90 minutes, are not over-powering, but rather subtle in nature. For instance, when Toby and Holly go to town hoping to borrow $2,000 from the bank, they search for a parking meter with time remaining. The humor is not in their search, nor even in them finding one with 15 minutes left on it. It’s in their naïve belief that 15 minutes will be enough time to obtain the loan.

Other amusing scenes include the confusion in the bank when Toby’s attempt to borrow money is mistaken as a bank robbery. The on-going gag of the Kwimper’s “john” and the conflict between the family and the gangster gamblers add to the film’s subtle humor. 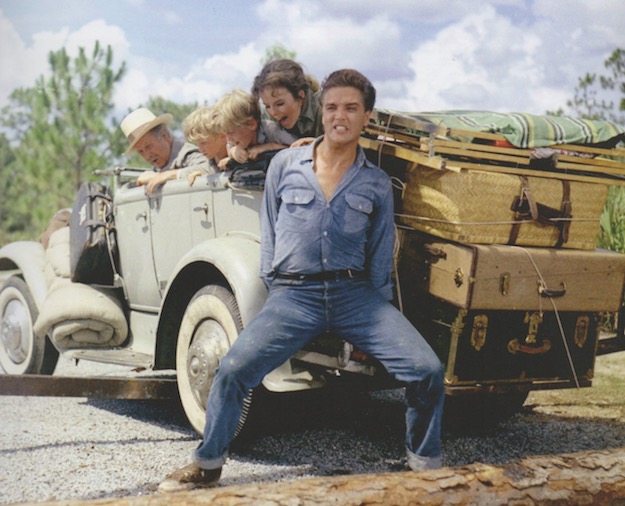 Variety judged Follow That Dream to be a good setting for Presley’s type of acting. “Presley buffs figure to take very kindly to the David Weisbart production,” read the review, “which displays their hero in good form in the kind of vehicle in which the record shows him to be salable—the light romantic comedy with songs.”

In reality, though, the role of Toby Kwimper was quite different from those in Elvis’ previous eight films. Presley had usually played an aggressive, often angry, young man in his earlier movies. Here he portrayed a slow-taking, calm country boy, with a mix of innocence and down home intuition. Using a vacant, questioning facial expression and a slow, monotone voice, Elvis gave a relaxed and believable performance. “Presley conveys the right blend of horse sense and naiveté in his characterization,” Variety noted.

• Above average for “Presley pix”

To the film as a whole, Variety assigned a passing grade. “There are lags and lapses in the picture, to be sure, but, by Presley pix standards, it’s above average.”

By 1962 the idea that “Presley pix” were a genre unto themselves and not to be judged by the same standards as other films had already formed in the minds of the nation’s movie reviewers. After giving lengthy reviews to Presley’s first seven films, The New York Times didn’t even bother to review Blue Hawaii the year before, and Times film critic Bosley Crowther, ever a Presley detractor, devoted a mere 100 words to Follow That Dream in the paper’s August 9, 1962, edition. His dismissive review read as follows: 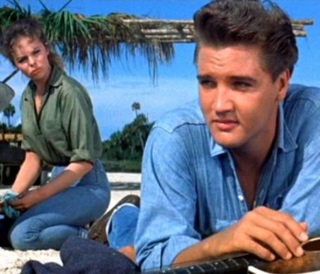 “Fan us with a palm frond—and a ragged one, at that. Elvis Presley, who was seen in ‘Blue Hawai,’ now appears on the Florida coast as a combination Sir Galahad and Li’l Abner in ‘Follow That Dream’ … Judging by this laboriously homespun and simple-minded exercise about just plain folks, somebody must have decided that the Presley films have been getting a little too glossy lately. In any case, compared to yesterday’s serving of cornmeal mush, ‘Blue Hawaii’ was caviar.”

Personally, I wonder if Crowther even bothered to view the film. Certainly his review reveals nothing he couldn’t have seen in the movie’s trailer. However, since he belittled Follow That Dream compared to Blue Hawaii (which his paper ignored some months before), let’s further explore the relationship between the two films.

Follow That Dream didn’t approach the commercial success of Blue Hawaii. It spent only two weeks on Variety’s National Box Office weekly survey, peaking at number five, while the Hawaiian film finished at number eight among the top-grossing films of 1961. The reason for that was clearly the lack of Elvis songs in Follow That Dream. The startling success of Blue Hawaii revealed once and for all that Elvis film-goers preferred his music to his acting. Rarely did 10 minutes of screen time pass between any 2 of Presley’s 14 musical numbers in Blue Hawaii, while an average of 30 minutes separated Elvis’ 5 tunes in Follow That Dream.

While acknowledging that Presley’s vocals were adequate, Variety judged them as disruptive to the movie’s flow. According to the review, Elvis “delivers five songs with vocal competence but nary a wiggle. The songs, four with a beat and one slow ballad, hamper the comic momentum of the story and are hardly distinguished ditties but, with EP doing the warbling, are apt to enjoy a commercial destiny on wax beyond their natural potential.”

Variety’s reviewer obviously didn’t realize that the Presley faithful had already demonstrated with Blue Hawaii that they preferred lots of Elvis music, regardless of its effect on the film’s “momentum.” Why, then, in their first Elvis film, did United Artists decide not to follow the successful music-crammed formula that Paramount used in Blue Hawaii? The answer, of course, is that Follow That Dream was already in the can before the Paramount film opened in November 1961. In fact, when Blue Hawaii was released, Elvis was already working on Kid Galahad, another United Artists project that mirrored the format of Follow That Dream.

UA was still operating under the mistaken belief that viewers flocked to the theaters to see Elvis act. And while that concept hampered Follow That Dream at the box office, at least in retrospect, the studio has the honor of producing the vehicle that features Elvis Presley’s finest acting job. His unexpected, natural comedic talent helped carry the film through its first 90 minutes. The picture then enters a decidedly dramatic interlude in a courtroom scene to determine custody of the Kwimpers’ adopted children. Presley’s speech to the judge is the actor’s finest dramatic moment in his film career. I marvel at the sincerity of Elvis' delivery every time I see it.

Elvis’ films of the early 1960s generally benefited from the work of competent co-stars, and Follow That Dream was no different. Variety handed out the following kudos.

“Arthur O’Connell scores as the big daddy of the clan, and is principle pawn in a running gag involving an overly-pressurized outhouse john. There’s a heavy streak of earthy humor in the film. Anne Helm is decorative and able as the Elvis-a-vis, or Daisy Mae to his Abner. Joanna Moore, whose Georgia drawl brings a touch of lingual authenticity to the premises … is effective as a welfare worker interested only in her own welfare. Especially chipper supporting work is contributed by Howard McNear [bank vice-president] and Simon Oakland [Nick the gangster].”

Elvis Presley’s work for United Artists in 1962 was the high water mark of his movie career. Follow That Dream was his best film, and Kid Galahad, which followed it, was nearly as good. The ghost of Blue Hawaii was already pushing Presley’s Hollywood career in a self-destructive direction, but Follow That Dream remains as a shining example of what Elvis could have been as an actor had he insisted that content rise above box office potential in his future films. — Alan Hanson | © April 2008

"The backwoods innocence, lack of education, and inherent honesty of the hillbilly stereotype are all used effectively to create humor and a little drama in the film."