Recently I received an email from “Echo.” It read:

“I have a question I hope you can answer. I have been trying to get the answer for some time now and have been unable to get one to my satisfaction. In 1955, ‘I Forgot to Remember to Forget You’ was released by Sun and then re-released by RCA. This song went to #1 on the country charts. Now the question. Did it go to #1 as a Sun release or an RCA release and did it go to #1 before ‘Heartbreak Hotel’? All the info I have says that ‘Heartbreak Hotel’ was Elvis’ first #1 hit, but if the former went to #1 first, then to my way of thinking ‘I Forgot’ was his first #1. Also, do you know the date it went #1?” 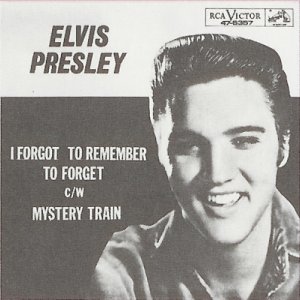 Fortunately, my local public library has Billboard magazine archives on microfilm going back to the 1955-1956 period. So, after a little research, I was able to find the answers to Echo’s questions.

• Billboard had lots of charts in the mid-fifties

A major Billboard service over the years has been to gather data on listeners and buyers of recorded music and present it in chart form in the magazine’s weekly issues. In the 1950s Billboard compiled and printed numerous weekly record charts, each with a specific focus. For instance, in the music fields of pop, country and western, and rhythm and blues, Billboard provided three charts for each: “Best Sellers in Stores,” “Most Played in Juke Boxes,” and “Most Played by Jockeys.” In the largest commercial sector of pop music, two other charts were provided: “Honor Roll of Hits,” which listed 30 songs, and “The Nation’s Top Tunes,” which compiled the country’s 100 most popular 45 rpm records. While other publications, such as Variety, also have printed record charts, Billboard’s listings have long been considered the industry standard when comparing recording artists and their records.

Now, let’s consider Echo’s concerns. First, she is correct that “I Forgot to Remember To Forget” was issued both by Sun and RCA in 1955. Backed with “Mystery Train,” it was the final of five Elvis singles issued by Sun in 1954-1955. After its release in September 1955, Billboard selected the single as both a “Spotlight” pick and as one of “This Week’s Best Buys.” In its September 10, 1955, issue, Billboard commented on the record as follows: 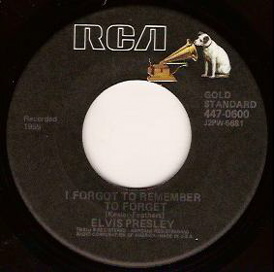 “With each release, Presley has been coming more and more quickly to the forefront. His current record has wasted no time in establishing itself. Already it appears on the Memphis and Houston territorial charts. It is also reported selling well in Richmond, Atlanta, Durham, Nashville and Dallas. Both sides are moving, with ‘I Forgot’ currently on top.”

On November 21, 1955, however, the single underwent a metamorphosis. On that day RCA Victor purchased Elvis’ contract from Sam Phillips. As part of the deal, RCA obtained the rights to all of Presley’s Sun recordings. Soon after, RCA pressed and distributed a single of “I Forgot to Remember to Forget” and “Mystery Train” on its own label.

As an RCA release, “I Forgot” made a small advance on the C&W charts in December 1955. On January 17, 1956, it was at #3 on “Sellers” and “Jukes” charts, and #4 on the “Jockeys” list. The final push it needed to get to #1 was provided, ironically, by “Heartbreak Hotel,” it’s competitor for the honor of Elvis’ first #1 record. Presley appeared on the Dorsey Brothers national TV program, “Stage Show,” four times in January and February 1956. He sang “Heartbreak Hotel” on the February 11 show. His performance not only launched that record up the pop charts, but also boosted the demand for his only other record out at that time. 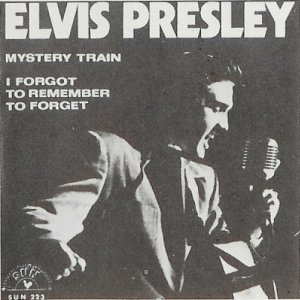 On February 25, 1956, “I Forgot to Remember to Forget” reached #1 on the C&W “Best Sellers in Stores” Billboard chart. The next week it topped the “Most Played in Juke Boxes” list. Ultimately, it spent 2 weeks atop the “Sellers” chart and 5 weeks at #1 on the “Juke Boxes” list. It never did reach #1 on the “Most Played by Jockeys” chart, peaking at #4. “I Forgot” was listed on at least one of Billboard’s three C&W charts for 40 straight weeks, finally dropping off of all three on June 23, 1956.

Now, let’s compare “I Forgot’s” chart success with that of “Heartbreak Hotel.” Elvis’ first new single release for RCA first appeared on a Billboard chart on March 3, 1956, when it entered the Top 100 list at #68. Just two weeks later, it reached #1 on the C&W “Best Sellers” chart, displacing Presley’s own recording of “I Forgot to Remember to Forget.” By April 28, it was #1 on all three C&W charts. Then on May 5, “Heartbreak Hotel” reached #1 on the Top 100 pop chart, where it remained for seven consecutive weeks. On May 12, “Heartbreak Hotel” established a Billboard record. That week it was #1 on eight charts at the same time—the Top 100, “Honor Roll of Hits,” and both the pop and C&W “Sellers,” “Juke Boxes,” and “Jockeys” charts. By mid-April “Heartbreak Hotel” had sold a million copies, making it Elvis’ first gold record.

So, to summarize the answers to Echo’s questions: “I Forgot to Remember to Forget” was the first Elvis single to reach #1 on a Billboard chart when it topped the magazine’s C&W “Best Sellers in Stores” list on February 25, 1956. It did so as an RCA release. “Heartbreak Hotel” first reached #1 on a Billboard chart three weeks later on March 17, 1956, when it topped the same C&W “Best Sellers” list. It wasn’t until seven weeks later that it reached #1 on Billboard’s Top 100 pop chart.