"In the Ghetto"
The Song That Made Elvis Presley Relevant Again

Elvis Presley’s “comeback” … as an event, his 1968 NBC-TV special has been given that label. As a broader development, though, Presley’s “comeback” in the late 1960s was a transition from the stagnation of his Hollywood career to regaining the popular music relevance he first achieved in the 1950s. Because it reminded the public of his enduring vocal talents, the ’68 TV special was the first step in the process. But that performance concentrated on his music of the past. To become musically fashionable again, Elvis had to prove he could generate recordings that fit with contemporary cultural trends. 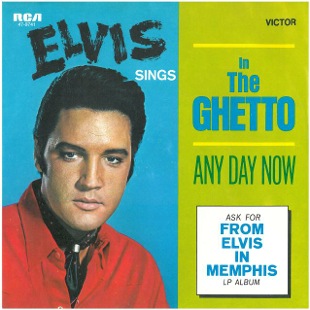 “If I Can Dream,” the finale in the ’68 special, is often conceded to be the song that put Elvis back on the road to prominence. It’s chart performance, though, shows that it actually created very little new musical momentum for Presley. While it performed better than average for an Elvis record on Billboard’s Hot 100, it failed to make the chart’s prestigious top 10 and wasn’t even listed in the magazine’s Top 100 Songs of 1968. Furthermore, it’s follow up single, “Memories,” also from the TV special, stalled out at #35 on the Hot 100.

In 1969, though, Elvis finally got the “comeback” record he was looking for when composer Scott “Mac” Davis offered him “In The Ghetto.” Davis went on to have a varied and productive career as a solo performer in the 1970s, but in Elvis circles he will always be remembered as the songwriter who helped Presley revive his career.

Writing with partner Billy Strange, Davis authored a half dozen songs that Elvis recorded in 1968-69. “A Little Less Conversation,” “Memories,” and “Clean Up Your Own Backyard” were released as singles, all with only moderate success. But when he was asked to submit some material for Presley’s upcoming January 1969 sessions at Memphis’s American Studio, Davis offered two songs he had written by himself — “In The Ghetto” and “Don’t Cry Daddy.”

At the 2006 ceremony inducting him into the Songwriter’s Hall of Fame, Davis explained how he came to write “In The Ghetto.”

“It’s a simple matter of growing up with a little boy whose father worked with my father. He lived in a part of town that was a dirt-street ghetto. I grew up in Lubbock, Texas, and it was a ghetto in every sense of the word, but we didn’t use the word back then. I was trying to come up with a song called ‘The Vicious Circle,’ how a child is born, he has no father, and the same thing happens. The word ‘Ghetto’ became popular in the late ’60s to describe the poor parts of town.” 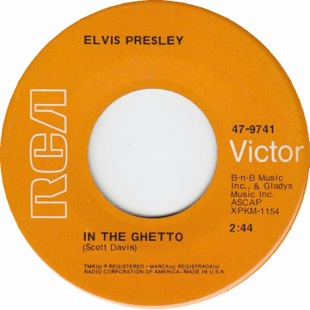 Speaking at a 2012 Country Music Hall of Fame gathering honoring Elvis on the 35th anniversary of his death, Davis added that the Civil Rights movement had inspired him to write “In The Ghetto.” He revealed, “I was going to call it ‘The Vicious Circle,’ but try to rhyme with ‘Circle.’” The song was published under the title of “In the Ghetto (The Vicious Circle),” but RCA received Davis’ permission to drop the subtitle before giving the song to Elvis.

“Davis crafted a song that touched on subject matter that really wasn’t the usual chart fodder at that time,” wrote Jim Beviglia in a 2012 American Songwriter magazine article. “Credit Presley as well for a typically inspired interpretation.”

Guided by the firm hand of producer Chips Moman, Elvis and the house band recorded 20 songs at American Studio in Memphis from January 13-23, 1969. In his study of Presley’s recording sessions, Ernst Jorgensen described how Moman ran things at American.

“To the musicians Chips Moman was a godfather-like figure in the studio, who would tolerate nothing less than total commitment. As far as he was concerned the musicians had no life outside recording and could be called to appear at any hour. But their hard work as a session band had paid off, giving them a reputation equaled only by the house bands at Motown, Muscle Shoals, and across town at Stax. They cut records as sharp and funky as their local rivals at Stax, but they also knew how to give them a genuinely ‘white’ commercial gloss, essential for the making of mainstream pop records.”

• Elvis convinced of the sincerity of the music

Presley and the band took up “In The Ghetto” at the start of a 9 p.m. session on January 20. Elvis had typically avoided recording songs with political messages, but he readily accepted the challenge presented by “In The Ghetto.” “He loved the song,” explained Jorgensen, “was convinced of the sincerity of its message, and felt strongly about the issue.” 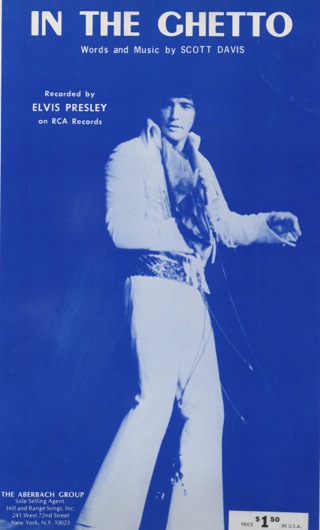 Through 23 takes, Elvis and the band searched for the mood that Mac Davis’s song demanded. The early takes were slow and somber, lacking the commitment Moman was looking for. He finally got the instrumental sound he wanted, but he still felt Elvis’ vocal could be improved. Presley always preferred recording with a live band, but with “In The Ghetto” he trusted Chips’s judgment and recorded another vocal track to be dubbed over the band’s background. Beviglia described the final result in his American Songwriter article:

“The song has the devastating feel of inevitability to it, as if the fate that befalls the young man in the song cannot be altered. When Presley sings in the bridge directly to his audience, however, it is a direct address to all those listening that reacting to such realities with a shrug of the shoulder is tantamount to helping them to persist.”

RCA released “In The Ghetto” as a single in April 1969. In its review of Elvis’ new record, Billboard noted, “This performance is Elvis at his best and the vital lyric line is right in today’s selling bag. This one could easily prove one of his all-time biggest items.” Variety’s review was less effusive but still positive. “Elvis Presley’s ‘In The Ghetto’ spotlights this rocking elder statesman on an unusual piece of material with a social message delivered with great impact.” (The “elder statesman” was then 34 years old.)

“In The Ghetto” entered the Hot 100 on May 3, 1969, and by the end of the month, it became the first Presley single to reach the top 10 in over four years. It peaked at No. 3 on June 14, eventually spending five weeks in the top 10 over the course of its 13-week run on the chart. On June 28, it reached No. 1 on Cashbox magazine’s list of the top 100 best selling singles, knocking The Beatles’s “Get Back” off the top spot.

• “In The Ghetto” never seems to lose its relevance

“In The Ghetto” gave Elvis Presley new and instant relevance in the pop music scene in 1969. Before the year was out, two other Presley singles reached the upper level of the Hot 100 (“Suspicious Minds” at No. 1 and “Don’t Cry Daddy” at No. 6). As Billboard envisioned, “In The Ghetto” has become one of Elvis Presley’s most important records, if not for its chart performance, than surely for its message. In closing his 2012 article in American Songwriter, Jim Beviglia offered the following tribute to Presley’s soulful recording:

“The fact that ‘In The Ghetto’ never seems to lose its relevance is both a testament to the power of Davis and Presley’s creation and a sad commentary on the societal ills of poverty that never seem to relent. That vicious circle keeps perpetuating itself some 43 years after this song first brought it to the pop music masses.” — Alan Hanson | © July 2014

"The fact that ‘In The Ghetto’ never seems to lose its relevance is both a testament to the power of Davis and Presley’s creation and a sad commentary on the societal ills of poverty that never seem to relent."