With the release of Kid Galahad in the late summer of 1962, the nation’s film reviewers were finally conceding that Elvis Presley had made the transition from detestable rock ’n’ roller (in their eyes) to established movie star. In its review of Presley’s tenth movie on July 25, 1962,Variety acknowledged him as one of the “screen’s most salable staples.” The reviewer went on to note that Elvis’ “following doesn’t seem to have diminished appreciably over the years in spite of the subtle alteration of his public image from the swivel-hipped, sideburn-adorned hound dog howler into the mellowed, mannerly matinee idol that he is today.” 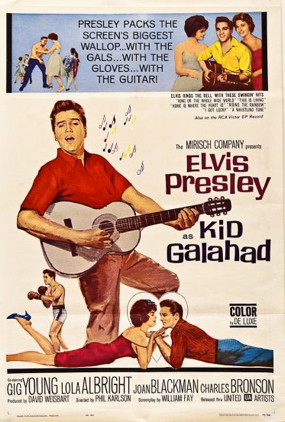 Certainly in his first two films for United Artists, the studio felt confident enough in Elvis to hand him two roles that were both out of the ordinary and challenging for him. The previous year, Presley played a subtle comedic role as a hillbilly in UA’s Follow That Dream. In Kid Galahad he was back with another atypical role, this time as a professional boxer. In previous films he had often been portrayed as a tough bar room and street brawler, but as Walter Gulick, a G.I. turned prizefighter, his pugilistic talents were on display openly and often.

Lead New York Times film critic Bosley Crowther, a frequent critic of Presley in the early 1960s, thought Elvis was woefully miscast in his latest screen vehicle. “The last thing you might think Elvis Presley is qualified to do,” according to Crowther in his March 7, 1963, review, “is act a diffident amateur boxer who turns out to be a tiger in the professional fight ring. And you might well persist in that opinion after seeing him in ‘Kid Galahad’.”

Kid Galahad’s screenplay alternates between light romantic comedy and dramatic episodes. In his previous films, Elvis’ characters almost always initially resisted the romantic wiles of female pursuers. Here, though, his Walter Gulick is stricken by love at the first site of Rose Grogan, played by Joan Blackman, who also played his love interest in Blue Hawaii. In that film she had an active role. In Kid Galahad her job consists mostly of staring seductively into Elvis’ eyes.

As in Follow That Dream, a crew of gangsters moves into town, leading to Kid Galahad’s few serious moments. The film’s best dramatic sequence finds Elvis coming to the rescue after his trainer, played by Charles Bronson, gets his hands broken by a couple of mobster heavies. 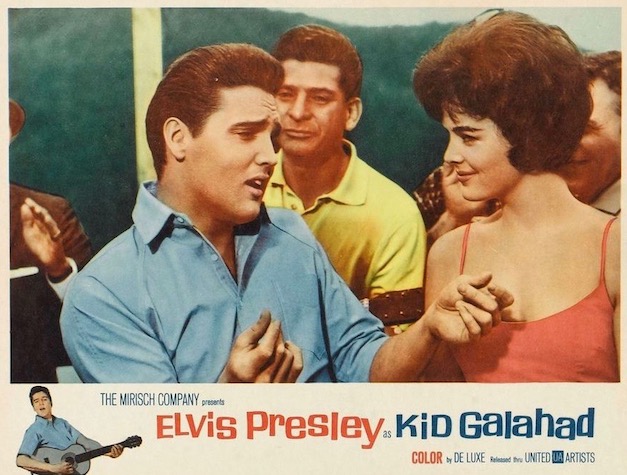 Of course, Kid Galahad contains the standard Presley musical numbers designed to draw his faithful followers to the box office. And, as usual, those tunes disturbed the film critics, who, being too old to like Presley’s style anyway, saw them as disruptive to the story line. In the Times, Crowther complained of Elvis’ “expressing himself at odd moments in conspicuously unpugnacious songs, brought up from what seems a ruptured larynx.” And showing why he should have kept to evaluating films, Variety’s reviewer made an odd recommendation to RCA Victor. “Elvis sings some half a dozen songs,” noted the review, “the most commercial of which figures to be ‘Home Is Where The Heart Is,’ a sentimental ballad with juke potential.”

• Presley rose to challenge of his co-stars

The presence of Gig Young and Charles Bronson, two polished pros, in Kid Galahad challenged Presley to step up his own performance. Director Phil Karlson is on record as saying that Elvis held his own with his two co-stars. Variety didn’t quite see it that way but gave Presley credit for knowing his limits as an actor: “Presley’s acting resources are limited, but he has gradually established a character with which he does not have to strain too much for emotional nuance—the soft-spoken, unaffected, polite, unspoiled, forthright and ultimately two-fisted country boy.” 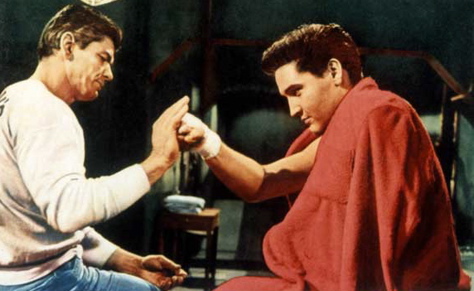 In playing a boxer, however, Elvis’ greatest challenge in Kid Galahad, was his physical appearance. Variety described Presley as “surprisingly paunchy” in the film, and the Times’ Crowther comically contended that Elvis’ physique was woefully miscast.

“Mr. Presley is certainly no model for a statue of Hercules, and his skill at projecting an illusion of ferocity is a very low degree. The expanses of flesh that he exposes when he gets into boxing togs are a fair indication that most of his muscles have come from punching a guitar, and his pout when he clouts a rival bears no resemblance to a killer’s slit-mouthed sneer … No, we’ll have to agree that Mr. Presley does not make a very convincing pug.”

Despite its limitations, Bosley Crowther saw some charm in Kid Galahad. “Somehow this clique-ridden picture … makes a moderately genial entertainment,” he wrote. “It’s not explosive, but it has the cheerful top of a lightly romantic contrivance that ranges between comedy and spoof. For this we can thank the other actors who played their roles ardently and Phil Karlson, who has directed at a brisk and deceptive pace.”

Conversely, Variety’s review criticized the director’s work and that of some of his actors: “Phil Karlson’s direction has some unaccountable lapses of perception, although the fault may lie partially with the limitations of several of his players from whom he apparently was unable to extract the desirable reaction.” Elsewhere Variety made it clear who it judged to be the weak link in the chain of actors. “Gig Young labors through the trite, confusing part of the mixed up proprietor of the upstate boxing stable,” according to the show biz publication. 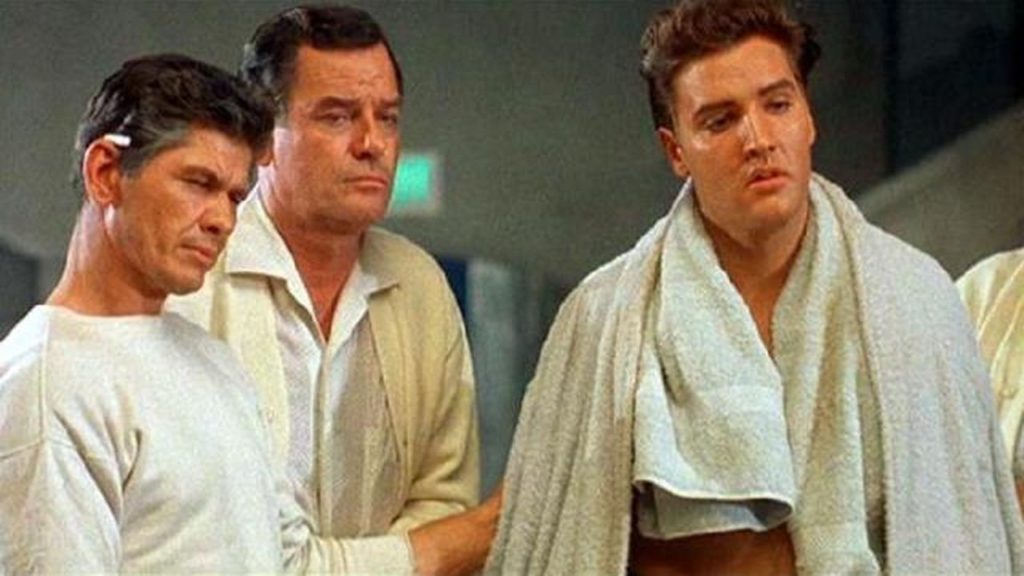 Crowther, however, praised Young and the other supporting actors. “Gig Young is attractively wicked as a Catskill hotel-keeping heel who tries to lead the young boxer to slaughter,” maintained Crowther. “Lola Albright is charmingly solicitous as Mr. Young’s disillusioned girl and Joan Blackman is pretty and submissive as the last who fails for Mr. Presley’s songs.”

I have to agree with Crowther’s assessment of Gig Young’s work in Kid Galahad. In fact, in addition to Presley, Young, Albright, and Blackman, the rest of the Cream Valley characters are played with charm by Charles Bronson as Lew the trainer, Ned Glass as Lieberman the Jewish nightspot owner, Robert Emhardt as Maynard the cook, Michael Dante as Joie the boxer, and Liam Redmond as Father Higgins. They form a pleasant family of characters that I never tire of revisiting each time I view Kid Galahad.

Though its review was decidedly critical throughout, Variety nevertheless predicted box office success for Kid Galahad:

“The story may be old, the direction not especially perceptive, the performances in several cases pretty poor, but United Artists’ ‘Kid Galahad’ is apt to be a moneymaker in spite of all this. It will be a special favorite with the youngsters who: (1) like Elvis more than most other people, (2) are that much less familiar with this workhorse plot than older audiences are.”

In closing his Times review, Crowther was much kinder. “For a film about a singing prize-fighter (which is silly enough) it will do,” he concluded. Kid Galahad will do for me as well. Through the years it and its United Artists predecessor, Follow That Dream, have risen to the top of my “Favorite Elvis Movies” list. Sadly, they also mark the apex of Presley’s Hollywood career. Most later Presley films would follow the “Blue Hawaii formula,” and as they did so, the allure of future Elvis movies began to fall off dramatically. — Alan Hanson | © April 2008

"The last thing you might think Elvis Presley is qualified to do is act a diffident amateur boxer who turns out to be a tiger in the professional fight ring."