When Live a Little, Love a Little was released in October 1968, it continued a trend begun earlier that year by Stay Away, Joe, which started the metamorphosis away from the long-established Elvis movie format. Director Norman Taurog was back for his ninth project with Presley, but this one would be quite different from the earlier, song-filled, romantic romps on which the two had collaborated before. Immediately after the opening credits, the film makes a left turn down “Bizarre Boulevard,” leaving traditional Elvis fans uneasy in their seats. 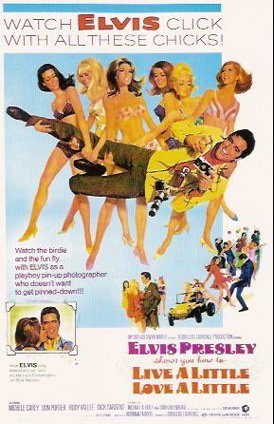 The moment the quirky Bernice, played by Michele Carey, comes on the scene with Albert, her canine enforcer, Live a Little, Love a Little starts to wobble and never quite regains its equilibrium. Seconds after seeing Elvis’ character on the beach, Bernice, in effect, kidnaps him for unknown reasons. Her attempt to control Elvis’ life is the basis of the picture’s storyline, but the viewer is not allowed to know her ultimate objective.

• Bernice Kept Everyone in the Dark

The plots of previous Presley features of the 1960s were typically based on some flimsy narrative with a romantic twist. But usually viewers knew early on what motivated the characters. In Live a Little, Love a Little, though, the whimsically eccentric Bernice keeps the audience, and Elvis, in the dark. “I have different names for different moods,” she explains for her use of alternate names, including Alice, Susie, Betty, and Mrs. Baby. From out of the blue, she tells Elvis, “I’ll bet you’re a marvelous lover,” and asks him, “Would you like to make love to me?” only to push him away when he responds positively.

The opening sequence, with Albert chasing Elvis into the surf, suggests the beginning of a straight comedy. However, while comedy elements abound throughout, a dramatic strand soon arises. Frustrated at first (like the audience) by Bernice’s unpredictable behavior, Elvis’ character soon turns angry and remains so for most of the movie. The standard Presley-movie fight scene, featuring Elvis’ buddy Red West, as usual, is one of the more violent such sequences in all of Elvis’ pictures. Later, Elvis even sucker-punches Dick Sargent, who plays Bernice’s timid former husband.

• Variety: One of Presley’s “dimmest vehicles”

In his review of October 9, 1968, Variety reviewer “Murf” called Live a Little, Love a Little one of Presley’s “dimmest vehicles.” He added, “Story peg—why has Michele Carey effectively kidnapped him?—is sidetracked in banal plotting and trite dialog until the answer not only doesn’t matter, it is barely noted at all … Songs are dull, physical values are standard, and mediocrity prevails … Below average b.o. prospects loom for Metro on general duals.”

According to “Murf,” who had given Presley decent reviews over the previous couple of years, Live a Little, Love a Little just couldn’t survive Michael A. Hoey and Dan Greenburg’s vague screenplay. “Miss Carey, and her persuasive Great Dane, mysteriously dominate Presley’s life,” noted the reviewer. “Angle is unresolved so long that ultimate explanation—something on the order of how shåe has needed to become a woman—has long since been smothered out by Presley’s far more interesting day-lighting as a photographer for both conservative [Rudy] Vallee and girlie mag publisher Don Porter.” 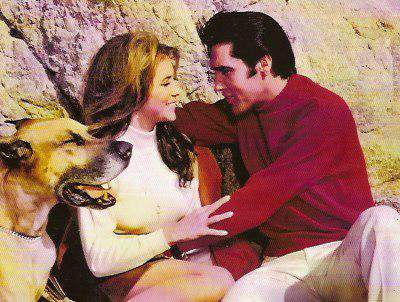 Live a Little, Love a Little gets out of the blocks quickly with Elvis jetting around in a dune buggy behind the opening credits. While the plot drags, the pace of action never does, what with Presley racing here and there in his dune buggy or convertible, or running up and down stairs between his two photography jobs. Unfortunately, the movie turns out to be in a hurry to get nowhere. In many past Elvis films, dull plots were compensated for by numerous Presley vocals or Hal Wallis’s picturesque settings. Aside from a host of babes, Live a Little, Love a Little has little scenery to offer, and with Elvis providing only four songs, the music is too spread out to be an effective element in the film.

Unlike most Presley pictures, this one has no title song or end number. The passable “Wonderful World” is played over the opening credits. A dream sequence features “The Edge of Reality,” with Elvis even throwing in a few hip movements reminiscent of his fifties stage gyrations. The film’s best number is “A Little Less Conversation,” by songwriter Mac Davis, who was becoming an important figure in Presley’s resurging recording career. Elvis’ final vocal was the bland ballad, “Almost in Love.”

At age 33, Elvis looked handsome and in tip top shape in Live a Little, Love a Little. It was the last film he made prior to taping his 1968 NBC-TV “Comeback Special,” and his work to get into physical condition for that event shows in his film work as well.

Variety’s reviewer noticed something odd in Elvis’ appearance in the film, however. “For some reason, Presley’s makeup tones resemble the American Indian character he played in ‘Stay Away, Joe,’ while Miss Carey’s flesh tones often are unnaturally pink. Makes for some unusual two-shots, though.” 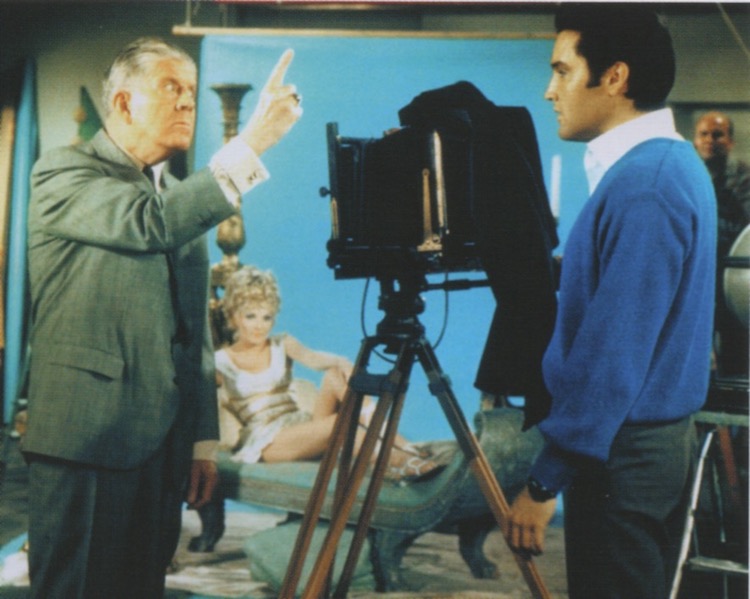 Of the supporting cast, Miss Carey has by far the largest part. In fact, in the film’s early going, she dominates Elvis not only in the storyline but also in dialog and camera time. Variety singled out Dick Sargent, Eddie Hodges, and Joan Shawlee as being “prominent in support.” Pretty Celeste Yarnall, to whom Elvis sings “A Little Less Conversation,” was chosen as the “Most Promising New Star” of 1968 by the National Association of Theatre Owners.

When Elvis’ song-filled, romantic comedies had played out at the box office, Hollywood tried pulling back on the music and adding avant-garde elements to Presley’s films. Live a Little, Love a Little is the best example of that experiment. Unfortunately, it too did poorly at the box office, leaving studio execs to search for another way of marketing Presley. They needn’t have been concerned, however, as Elvis would soon decide to leave the Hollywood set for the Las Vegas showroom. There would be only three more pictures in the theatrical film career of Elvis Presley. — Alan Hanson | © August 2008

"Immediately after the opening credits, the film makes a left turn down 'Bizarre Boulevard,' leaving traditional Elvis fans uneasy in their seats."