A Jukebox Musical Comes to Town

Before the curtain was half way up, Carl Perkins and the band jumped into “Blue Suede Shoes.” The guitar and piano players sang into stand up mikes, while sidemen worked the stand up bass and a simple drum set. The one-room recording studio at Memphis’s Sun Records in 1956 served as the backdrop, although only those familiar with what really happened there on December 4, 1956, would recognize it as such. The driving, in-your-face delivery of the open number clearly indicated that this stage adaption was going to be far different than the true story on which it was based.

“The Million Dollar Quartet” … it’s a term with which Elvis Presley fans have long been familiar. Recordings of the spontaneous jam session at Sun Records studio on December 4, 1956, have been readily available for three decades now, and the physical convergence of Elvis, Jerry Lee Lewis, Carl Perkins, and Johnny Cash, all early in their fabled careers that afternoon, has achieved legendary status in the history of rock music. 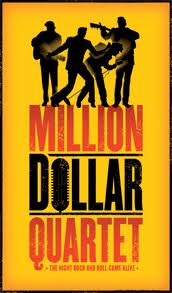 It was while reading a newspaper article in the fall of 2008, however, that I first learned The Million Dollar Quartet was also the name of a new stage musical, then playing in Chicago. It piqued my interest at the time, but I heard no more about it for the next two years, and, besides, Elvis fans like me were focused on All Shook Up, an Elvis-based jukebox musical that made it to Broadway the year before.

In the background, though, The Million Dollar Quartet was quietly building notoriety. Nearly two years of steady box office success in Chicago earned the musical at shot on Broadway, where it premiered in April 2010 at the Nederlander Theatre. In 2010 it was nominated for a Tony Award in the “Best Musical” category. After 489 performances, it moved to an Off-Broadway theatre in July 2011. Then in October 2011 a successful national tour of The Million Dollar Quartet began, and when it came to Spokane for a four-day run, I jumped at the chance to see the latest musical based on a fabled event in the life of Elvis Presley.

The opening scene of quickly dismissed that expectation. For starters, Carl Perkins did not sing “Blue Suede Shoes,” the musical’s opening number, at the original jam session. And all participants on the 1956 tapes were relaxed and subdued with their music that afternoon. It was obvious from the beginning that the musical’s actors were going to be energetic and emotionally charged throughout. Not surprisingly, the increased vigor of the performers made for a very entertaining show.

After Perkins finished the opener, Sam Phillips came on stage. (To keep things simple, for now, I’m going to use the character names instead of the actors’s names.) In the dual role of narrator and participant, Phillips introduced the other characters and revealed the story line. We soon learned that Perkins was at Sun that day for a recording session, on which Jerry Lee Lewis was to play piano. Shortly thereafter, Johnny Cash, having been called by Sam Phillips, showed up on stage, followed by Elvis with a young lady in tow. 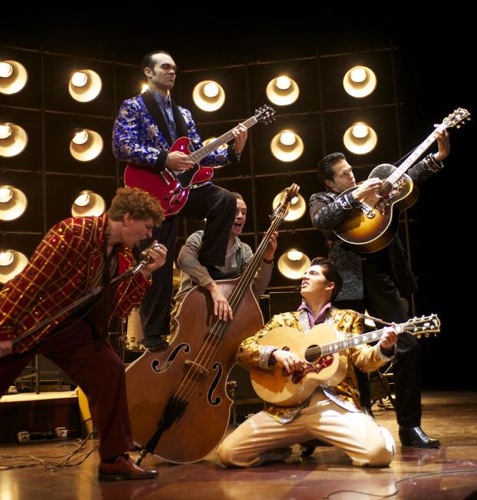 Events to this point were generally historically accurate, but soon events begin to deviate greatly from what really happened in Memphis 57 years ago. Elvis’ guest, a Las Vegas showgirl named Marilyn Evans, became “Dyanne” on stage. Strickly an off-mike observer in 1956, she becomes a musical participant in MDQ. An even greater departure from the original jam session, however, is the musical participation of Johnny Cash. It’s not known for certain where Cash was when Sam Phillips turned on the tape machine. He may already have gone home or he may have been somewhere in the studio where the microphone could not pick up his voice. Clearly, though, his voice is not heard at all on the original jam session tape.

Once Presley and Dyanne arrived, the production’s full complement of eight actors were on stage and stayed there for the remainder of the show. The Million Dollar Quartet ran about an hour and 45 minutes and was presented without an intermission, presumably so as not to interrupt the frenetic pace of the musical numbers.

Perkins, Lewis, Cash, and Presley then took turns at the mike and occasionally sang in group harmony. Dyanne, who generally provided background vocals, took the lead on a couple of songs, including “Fever.” Between musical numbers, Sam Phillips tried to inject some drama into the flimsy storyline. He felt betrayed when both Cash and Perkins told him they were leaving Sun to record for another label. Elvis, on the other hand, was portrayed, absurdly, as wishing he could return to the simple life of recording at Sun Records. In the end, like a proud father, Sam became resigned to seeing his progeny leave him, and hoped that they all would live “happy lives.”

The backstory fades before what is at the heart of The Million Dollar Quartet—the music. In essence, this musical is basically a concert by a pretty damn good fifties rock ’n’ roll band. The obvious objective of the producers was to compile a playlist that represented the best and hottest of late ’50s and early ’60s pop music. No attempt was made to align the show’s music with that of the original session at Sun Records in 1956. In fact, only three songs from the original jam session were included in the musical score of MDQ. (Elvis sang “Peace in the Valley” and the quartet harmonized on “Down By the Riverside” and “Brown Eyed Handsome Man.”) 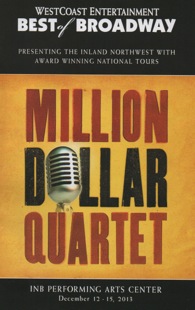 An advantage that The Million Dollar Quartet has over many other jukebox musicals is that it features the music of four separate rock ’n’ roll legends. To enjoy All Shook Up, the audience has to appreciate the music of Elvis Presley alone. MDQ appeals to the accumulated fans of Elvis, Jerry Lee Lewis, Johnny Cash, and Carl Perkins.

The producers were also wise enough not to emphasize any one of them other the others. In addition to “Peace in the Valley,” Elvis sings “Long Tall Sally,” “That’s All Right,” and “Hound Dog.” Jerry Lee performs “Real Wild Child,” “Great Balls of Fire,” and “Whole Lotta Shakin’ Goin’ On.” Johnny Cash offers “I Walk the Line,” “Folsom Prison Blues,” and “Ring of Fire.” Perkins checks in with “Matchbox,” “My Babe,” and “See You Later Alligator.”

Of course, with such a small cast, the impact of the music in The Million Dollar Quartet depends heavily on the musicianship of the actors playing the parts. Although many different performers have appeared in the various productions of the musical, I can’t imagine a better company than those in the national tour production that came to Spokane. The musical leader of the group is James Barry, who plays Carl Perkins. Barry’s lead guitar work is phenomenal and injects instrumental intensity into nearly every number in the score. As Elvis, Cody Slaughter has the looks and the moves of the original. (Many Elvis fans will recognize Slaughter as the winner of the Elvis Week “Ultimate Elvis Tribute Artist” contest in 2011.) John Countryman certainly doesn’t look like Jerry Lee Lewis, but he’s got all “The Killer’s” piano moves down, and Scott Moreau does a nice job with “The Man in Black’s” vocals and mannerisms. Kelly LaMont is the most experienced member of the cast. She originated the role of Dyanne in the Chicago production of MDQ in 2008 and has been with the touring company since it started in 2011.

The music they delivered at the performance I saw was so electrifying that the entire audience was on its feet throughout the last five numbers of the show. At the end they added a rendition of Chuck Berry’s “Run, Run Rudolf,” although, doubtless, that was scratched from the travelling show after the Christmas season.

I enjoyed All Shook Up, but The Million Dollar Quartet is an exciting step up for Elvis fans and all lovers of the music he and others generated in the early days of rock ’n’ roll. If the current touring company comes to a town anywhere near you, I highly recommend that you see it. Other productions of the musical are also currently playing at the Apollo Theatre in Chicago and at Harrah’s Showroom in Las Vegas. — Alan Hanson | © December 2013

"The backstory fades before what is at the heart of The Million Dollar Quartet—the music. In essence, this musical is basically a concert by a pretty damn good fifties rock ’n’ roll band."