Like all documentaries, Elvis: That’s the Way It Is is best judged in the context of its time. As a college-age Elvis fan in 1970, the film was a revelation. By then, all of the Presley faithful were well aware of their idol’s return to live performances in Las Vegas the previous year. We had listened to his new live recordings and seen the photos, but they alone weren’t enough for us to understand the transformation that had come over Elvis. He had always been a visual entertainer, and so for those of us who had not been fortunate enough to see him live during his first three engagements in Las Vegas, That’s the Way It Is was the most-anticipated Elvis movie in years. 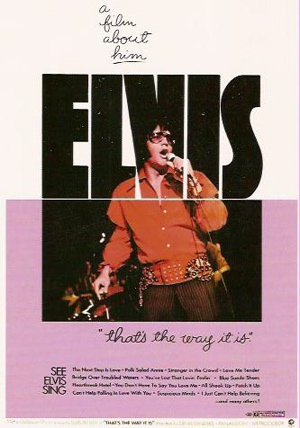 In its review of October 28, 1970, Variety enthusiastically endorsed both the film and the new Elvis it featured. “Elvis Presley explodes again on the screen in ‘That’s the Way It Is,’” the review began. “Presley was the Pied Piper of the rock era, and this film shows that the parade hasn’t even begun to pass him by.” Noting the film was “handsomely and inventively assembled,” the reviewer concluded, “This is no quickie saturation item; a ton of money can be made from under-40 audiences in extended playoff.”

The MGM release named no producer, leaving director Denis Sanders and film editor Henry Berman to share the credit for the documentary’s flashy construction. While keeping the focus on Elvis, Berman often cut in fan comments (16 times, in fact), running anywhere from 5 to 30 seconds each. Sanders presented the content in a broad, three-part chronological format. The use of a few simple sub-titles would have made the film’s transitional jumps easier to follow, but Variety’s reviewer, stop-watch in hand, easily identified the film’s three segments.

“First 20 minutes of the film are devoted to studio rehearsals, cross cut with fast excerpts from personal interviews with fans. The rehearsal horseplay comes off very well. Then onto Vegas for about 26 minutes of pre-opening preparation by both Presley and the hotel staff. Finally, most of the remaining hour-plus comprises actual show numbers culled from several live performances.”

Of course, as a young Elvis loyalist in 1970, I viewed most of the peripheral scenes with fans and hotel staff as lost minutes that could have been better used focusing on the star. (Most wasteful were the four minutes given to an Elvis fan convention in Luxembourg.) Clearly, though, director Sanders properly sought to spotlight not just the performer, but also the overall Presley phenomenon at the time. The fans, the hotel prep, even the foreign convention were all part of that story, and thus, I reluctantly admit, merit their place in That’s the Way It Is.

Of course, Elvis is the star of this film. What appears on screen is an Elvis, who, after a decade away from the stage, seeks to reprise the high-energy persona that rocketed him to fame in the fifties. He’s trim and cat-like in appearance. With powerful voice, he rocks his way through numbers like “Patch and Up” and “Polk Salad Annie.” At age 35, however, his once boundless energy fails him at times, and, sweating profusely, he’s left breathless and limp after his most physical numbers.

Still, Howard Thompson, whose review of That’s the Way It Is appeared in the New York Times on December 17, 1970, was impressed by the showmanship and energy of the mature Elvis. 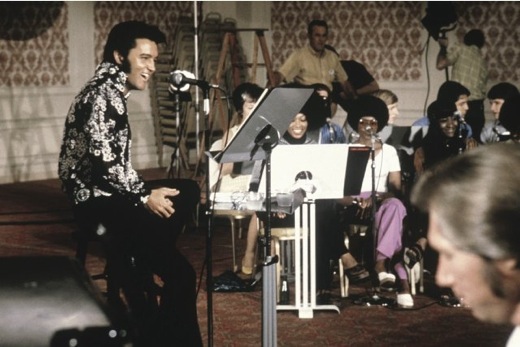 “The callow youth who gyrated to fame and wealth as a kind of national joke is now a handsome man, a bit jowlier, true. But the face has character. The personality is a bit more suave but stronger. The powerhouse drive that used to flail about wildly is shrewdly disciplined and siphoned until it explodes into his extraordinary sense of rhythm. Tired? Elvis? He’s ferocious. Most impressively of all, he comes over as a genial, reasonably balanced guy … Years later, the Presley act has an actor and a good one.”

Thompson saw only one weakness in That’s the Way It Is. “If only the picture had probed a bit,” he wondered. “He jokes easily enough with his colleagues, but what does Presley think and what is he really like?” The film offers occasional glimpses at the inner Elvis. We hear him voice concern over the family situation of a former employee, and seeing his nervousness prior to curtain time is a nice human touch.

Make no mistake, though. That’s the Way It Is was designed to tell Elvis’ story as a Las Vegas entertainer and no more. It gives a fairytale glow to Presley’s life at the time. We know now that there was so much more going on behind the scenes. “Where, during the entire picture, was his guiding genius-manager, Col. Tom Parker?” asks Thompson. Even more telling is the complete absence from the film of even any mention of Elvis’ wife and daughter. This was never intended to be a tell-all film. Instead, it sought to perpetuate and build upon a myth, and within those narrow limits, it achieved its goal.

In 2001, a little over 30 years after the original documentary was released, a new film, entitled Elvis: That’s the Way It Is: Special Edition, appeared. The “Special Edition,” however, should not be classified with the alternate versions of other prominent films that have been released on DVD over the last decade. Such “director’s cuts” are usually characterized by the adding of footage, such as scenes that had been cut from the original film. The 2001 version of That’s the Way It Is, however, is better termed a “remake” of the original. 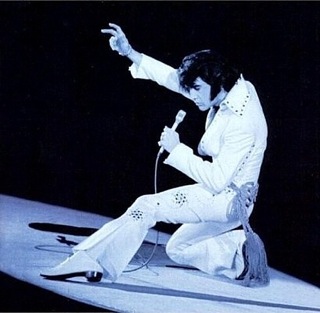 While it maintains the three-part chronological format of the theatrical version, “Special Edition” changes the focus of the documentary from the Elvis phenomenon to Elvis himself. Stripped from the original are all 16 fan-comment segments, as well as the Las Vegas fan wedding and Luxembourg convention sequences. Virtually half of the original film’s material is replaced with more footage of Elvis rehearsing and performing on stage. The remake has Elvis singing 19 songs on stage, three more than in the original version. Even some of the numbers Elvis sings in both films are not the same. The remake replaces several songs with alternate versions filmed at different shows during Elvis’ summer engagement at the International in 1970. Instead of expanding on the original, at 97 minutes the remake is actually 11 minutes shorter than the 1970 version.

• Variety saw film as heralding a new era for Elvis

For Elvis fans, both the 1970 original and the 2001 “Special Edition” of That’s the Way It Is will always be cherished movies that forever freeze in time the beginning of a second “golden age” for Elvis Presley. We know now that it was to be the last phase of his career. To Variety’s reviewer back in 1970, however, the film seemed to herald a new era of relevance for Presley.

“Presley is the major connective in pop music for the last 15 years. Initially, he was the white boy whose soul music attracted both white and black audiences; in this regard, he did for music in that era what Benny Goodman did for swing in 1935. In his style, presence and technique, Presley opened the doors for 15 years of evolving pop music. Now, far from being a relic, he is again opening doors—not only for himself, but for current pop artists whose music and thoughts are being brought to older audiences along with his own early hits.”

Whether Elvis Presley’s Las Vegas success was truly a door-opener for other rock singers of his generation is something for pop music historians to debate. We do know that in 1970 That’s the Way It Is did not achieve the level of commercial success that Variety predicted for it. It never got higher than #22 on the magazine’s weekly list of top-grossing films.

In an appropriate touch of irony, 1970’s top-grossing music documentary was Woodstock. Much as they had done with Elvis in 1956, Americans in 1970 were focusing their attention on a counter-culture musical element that they feared was contaminating the nation’s youth. At the same time, Elvis Presley’s newfound success on the Las Vegas stage, as revealed in That’s the Way It Is, should have been a reassuring sign to all that such generational fears tend to be groundless. — Alan Hanson | © November 2008

“Presley was the Pied Piper of the rock era, and this film shows that the parade hasn’t even begun to pass him by.”